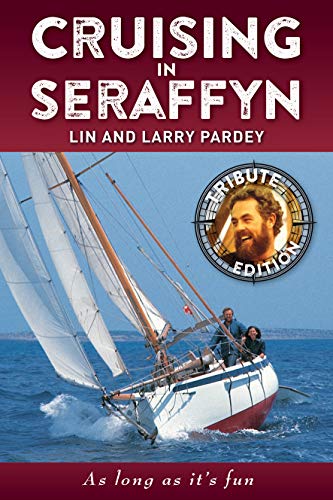 Let Cruising in Seraffyn introduce you to a special world. The first of a four-book series, it is full of the sights, sounds and people of Mexico, Central America, the Caribbean and the islands of the Atlantic Ocean. Read how Lin and Larry built their wooden 24-foot engineless cutter and set off hoping for a few months of true freedom in spite of limited finances. Share their excitement as they learn how to earn as they go and sail ever further afield. These two persuasive sailor/writers set out convincing arguments to get you chasing your dream sooner than you think –be it exploring the world under sail or adventuring towards any new goal. A favorite of sailors and armchair sailors for over four decades, this book is more than a first-rate tale and love story; it is also a carefully thought-out guide to living aboard a small boat, with fun and good seamanship as guiding principles. This tribute edition, created by Lin to honor Larry, includes a new foreword, updated appendices and a color insert showing Seraffyn during her circumnavigation and afterwards, under the guardianship of subsequent owners – which proves that Larry really did build her to last for 50 years or more.Profits from this tribute edition will go towards supporting and upgrading the Observatory built to honor Larry Pardey. Over 5000 children each year visit Camp Bentzon on Kawau Island in New Zealand just across from where Lin and Larry built their small boatyard and home base. Now these children will get a chance to see and appreciate the night skies far from the blinding lights of a city.